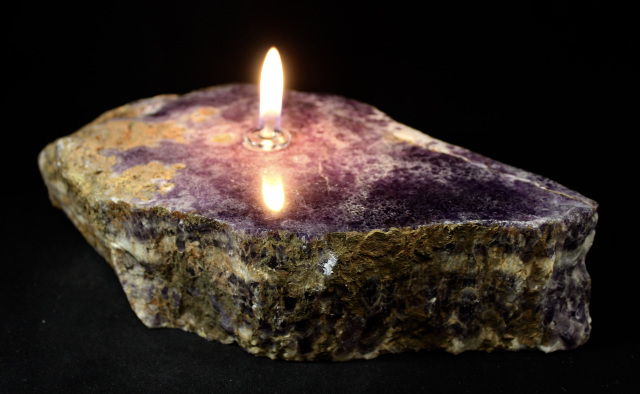 Add to Cart
Chevron Amethyst is formed as hydrothermal vein filling, often with several growth phases with variable color that cause a banding pattern. A violet to purple variety of quartz that owes its color to gamma irradiation (Berthelot, 1906) and the presence of traces of iron built into its crystal lattice (Holden, 1925). The irradiation causes the iron Fe(+3) atoms that replace Si in the lattice to lose an electron and form a [FeO4]0 color center (Lehmann and Moore, 1966).

The color in amethyst from most localities is unevenly distributed in the individual crystals. In amethyst geodes, it is often most intense in the growth zones under the rhombohedral faces (at the tips). Occasionally the color is deeper under either the r or z rhombohedral faces, giving the crystal a pinwheel appearance when viewed from the top. In prismatic crystals, the color may appear in phantom-like thin layers, while in scepters and skeleton quartz the color is often concentrated along the edges, and accompanied by smoky zones. Despite the intense color, the content of iron occupying Si positions in amethyst is rather low, in the 10-100 ppm range (Dennen and Puckett, 1972).

When heated to more than about 300-400°C, amethyst loses its violet color and often turns yellow, orange or brown, and then resembles the quartz variety citrine, but depending on the locality and the temperature during the heat treatment it may also turn colorless or - rarely - green (Rose and Lietz, 1954; Neumann and Schmetzer, 1984).

Irradiation with UV light will also destroy the color centers, and accordingly prolonged exposure to sunlight will slowly fade amethyst (Currier, 1985). The photo to the right shows the effects of heat (bottom left and right) and UV irradiation (top right) on the color of a specimen from Uruguay.

Amethyst is pleochroic (Haidinger, 1847; Pancharatnam, 1954; Raman, 1954): when the polarization of the light is changed from parallel to the c-axis to perpendicular to the c-axis, amethyst changes its color from blue-violet to purple. The strength of the effect varies to a considerable degree, and changes in the hue depending on the direction of the transmitted light may be observable with the naked eye, in particular in crystals with a zonar development of color, which may even show sky-blue tones.